Remnants of the Old Web

So much information is lost over time. More people are aware now of digital degradation, everything online being permeable and such, and this has inspired people to archive.

Why Archive a bunch of random personal sites? What value do they have?

In my opinion, websites are intrinsicly of value. There's myriad reasons why, but some include: providing insight into the thoughts of the past, individual writings are of value by nature, provides chronicles of the past and they remind us of things that aren't as relevant anymore.

With social media, we have lost insurmountable outlets of passion. Passion is now funneled and repurposed. I talk about validation later on here, but first let me get to what can drive us to create.

People devoted entire sites to their interests. I miss that passion. I remember browsing Pokémon fansites and them having lots of affiliates, sister sites and topsites. Because of the internet back then, people used links to each other to get out there and in doing so created communities, from small to large. Chatboxes were used to keep up with friends made via affiliation, random passing comments and more. Some sites even had awards which they gave out to others…it was very unique, very creative and completely untouched by monetization.

People just…put up what they wanted. And that sounds simple, but how many websites outside of neocities do that? If they do, they’re hard to find and trace thanks to SEO among other things. But I won’t delve into that because I want to talk more about what else we could take from the oldweb.

So, what did people feel like putting on their sites?

Download pages, contests, awards/badges, fanmail, icons, free stuff and interviews. This is just a slither of common content people had. People were free to be fun and explore their hobbies via their site or by visiting one. Fanmail has to be one of my favourites here; people used to write in complimenting the site (or have the occasional troll!) and the webmaster(s) would reply. The original message and the responses were all put on a fanmail page so all could read.

A lovely thought and sentiment! 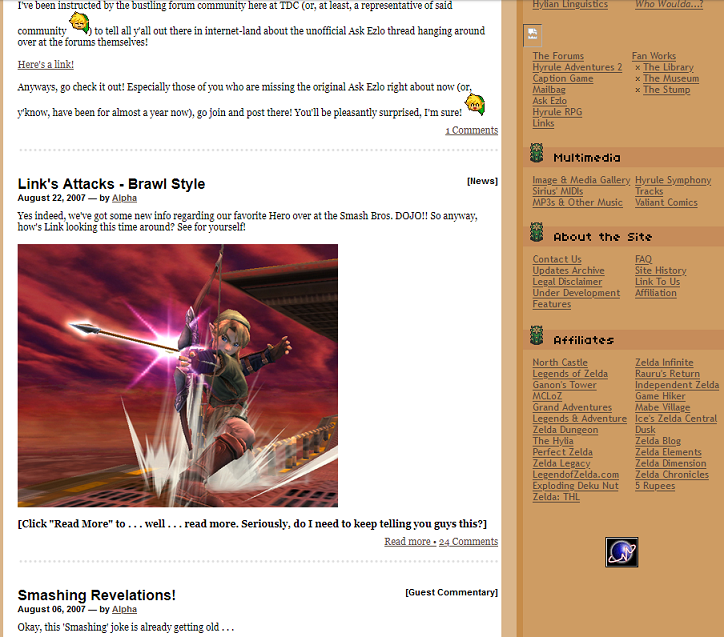 The Desert Colossus is an old Zelda site which I used to visit for their mailbag and caption contests. Bring them back!!


I recall an era where Photoshop & Paint Shop Pro were used and it was glorious. We had image-heavy websites lovingly crafted (with loading times) – they were a joy to look at. They were very popular, though I cannot recall the exact years (around 2005+ iirc). Tutorials for such software was never too far to find, which is perhaps why trends like this got popular. What was best, however, was how the individual used the knowledge. One of my favourites was the Exploding Dekunut which is, of course, now shut down. Another aesthetic were the blinds effect; lots of people followed the tutorials to create them then implement them to their sites.

Nowadays, people use followers as numbers to feel validated. No one is exempt from the pressure of peers, and having that acceptance feels nice, even if it’s not genuine. This is one of my biggest problems with the current web. Although it was present before (e.g. mySpace) the current web is far more problematic. For example, having a social media presence is even a requirement in some jobs, and what happens if you can’t get that exposure? Well, that’s your fault, they tell you. This is the reality in some jobs such as graphic design, writing etc.

I don’t believe the total erasure of seeing the number of followers you have would solve the problem, though I think for a lot of people’s health it would be good to have it out of sight for their visits. We all knew back when we actually used Facebook that they were fake friends, so why do we bother?

The art world is probably the most affected by this. Countless artists are on twitter and are incredibly desperate to gain followers, retweets and more because they need the traction to get exposure. They do art for free, raffles etc…Because they know they have intense competition. They think to themselves, “why would anyone get art from me when they could get it from anyone else?” and so here the selling begins. The option to get money from your favourite hobby is far too ideal for someone to pass, and so many young artists get roped into this way of thinking, because at the end of the day, if you want money, you need the exposure. You can draw parallels to gaming/streaming as well as they go through the same problems and respond to it the same way.

We put too much weight on having a number. The reality is that we all know most of the people that follow you don’t give a shit about what you post, though they may comment/like from time to time to try to get you to interact with their posts.

I support the people on Neocities for daring to do what was long missed. It’s enabled us to continue being creatives, share knowledge and to simply enjoy what we love. We’ve brought back in our own little remnants of the old web.